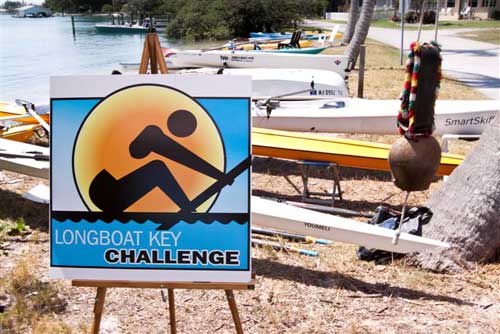 A fun race for rowers/scullers & all human powered craft

The Statistics …as it happened on May 15

Water condition - Calm at the start along the West-side of Sister Key to mildly rough on the open Bay to rougher on the North West side of Jewfish Key.

Toughest point - the 1/4 mile Mangrove channel for the scullers - it was clearly to narrow - yet no one complained - Scullers lost about 10 min in maneuvering through the narrow 1/4 mile passage.

Mishaps or issues - None!

Poseidon the god of Storm and the Sea finally gave his favorable nod to the LBK Challenge. Though the early forecast was less then promising and showed storms on Saturday and Sunday with high winds as well. A heavy thunderstorm went over our area early Sunday morning, between 4 & 5 am.

The weather remained doubtful until about 7am when Dean Weihnacht and I started setting up the race reception tent & “things” - just in spite.

As of 8am it became clear the Regatta “could” happen. By 9:30 am we decided to do the full route of 5.6 miles and at 9:45am Tom Asposporos, ringing the big Swiss cow bell, sent the first group, Scullers, Surf-ski and K1 Kayak, on their way. The second group, all the excited Kayakers, followed only minutes later.

The After Race Party

40 Participants, Spectators and Family members have been treated by MarVista (on the beach with white table cloth!) to splendid burgers, grilled chicken & salads.